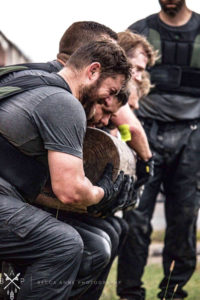 Graduation: Hell on Earth Part 3, The Dance With The Devil Himself.

Going into Graduation I knew the boys would be operating with pent up energy.  Honestly, over the course of 6-months I threw everything I had at them. There were no secrets or tricks left.  It was time to apply everything they had learned, strip them down to their rawest element, and help them tap into the warrior spirit  we all possess.

Commander Mark Divine with SEALFIT calls this the kokoro spirit.  The term kokoro in Japanese translates to “heart” in English.  As Divine explained it to me and my fellow classmates is that it is the convergence of mind and heart into one.

To expand on this definition we look at warrior spirit being the “heart-center” of Man or what I like to say, “Man’s WHY.”  Combining both, you then have an unbeatable man.  This was my goal for graduation.

And how do you do it? You must place man in the arena and have him dance with the devil himself.

As the men set out on their 60-hour journey, I knew that when put to the test we would quickly see men tapping into their pent up energy first, rely on motivation second, their energy from their teammates third, and when there is nothing left they would tap into their warrior spirit.  The culmination of their training.

Friday was all about bringing the fight to their doorstep and presenting a lot of unknowns.  One thing that played in our advantage is that one of the class members had to miss Friday due to a mandatory work function.  A last minute meeting that he couldn’t get out of.  He told me and I didn’t pass that onto the class.  WHY? I wanted to hear and see how Men would react when he didn’t show.  Did they judge? Were they upset?

Next, how would Man react when he gets punched in the mouth and he didn’t see it coming? Increase the stress levels, make them think in conflict, and lead under pressure.  From the word go the guys couldn’t talk.  They had to communicate through non-verbals, hand-signals, and body language.  I remember vividly giving roster #1 Tim Craig a set of instructions so quickly he we would struggle to articulate it to his teammates which intern would create confusion from the word go.  Here was the scenario:

Sounds easy, right? Wrong.  When your heart rate is elevated, the adrenaline is pumping, and the monkey in your mind is jumping from branch to branch, things get complicated quickly.

This was their first baseline test.  They succeeded despite all odds.  By Friday night the men were tormented, but were not beaten.  When they got back to HQ around 7 p.m. Friday night and saw their family standing there for dinner one man broke down crying.  At that point, I could start to see and feel the men gelling like they never have before.

After dinner concluded they picked up their teammate and welcomed him with open arms.  Some reluctant, but they all respected him nonetheless.  And when he was thrown into the fire he made up for every bit that he missed.  As I write this, I still am amazed what the man endured to get back with his team.  A true testament to his warrior spirit.  Something that all the men were tapping into heading to Saturday.

Saturday.  The men were up all night and when we began our Saturday their bodies were screaming.  Slow and methodical.  Let the lactic acid build up and see how they handled discomfort.  It was not a run and gun type of day like one would think.  Their screaming bodies alone would make a Man want to quit.  And to add on a long ruck up Pinnacle Mountain with 50 lbs. Plus, a 1.5 mile swim, and a whole lot more, it would send some men over the edge.  But the hardest part was something I couldn’t even predict.  The weather.  Throughout Saturday night they were to make camp, start a fire from scratch, and enjoy in a brotherhood. And they did……..in the pouring down rain.  The sky busted wide open and they slept in the mud together leaving them exhausted for the final day.

Sunday.   When I loaded the men up into the transportation vehicle I fed them a hot breakfast.  Relief was on their face because they knew the road to earning their Phoenix was nearing an end.  They had been beaten, tormented, and were exhausted, but they had more fight left to give.  As we drove to HQ I listened to their dialogue.  Laughter exploded as the men were reminiscing about the entire weekend.  No sleep.  Wet. And tired they were at their rawest element.  Upon arriving I told them that whatever happened to just trust their training and be the men they were created to be.

As they unloaded the vehicle and fell in line the new Cadres gave them one last push.  Probably the highlight of the morning is when they were finishing team Murph and they were doing push-ups.  They tapped into an element only few people ever experience.  Stripped of everything the Men came together as one, were emotionally the rawest I have ever seen them.

Sunday wasn’t about how far we could push them.  It was about safety and let their emotions do the work, which they didn’t disappoint.  As the men were finishing up with Log PT their families showed up.  Gathered around they got to watch how far these men came throughout the weekend. As they finished their last evolution I lined all the men up and had each one tell their “why” to the crowd.  Crying each man stepped up and opened their hearts to their family and strangers.  I was in tears and I knew at that point the School of Man was officially born.